Four tries to Taleena Simon has launched the Sydney Roosters into the inaugural NRL Holden Women's Premiership grand final against Brisbane next week after a dominant 26-0 victory over St George Illawarra at Allianz Stadium on Saturday night.

Despite the Tricolours going into the game winless, the shortness of the competition meant Adam Hartigan's side only needed to win by two points to leapfrog the Dragons into second spot on the NRLW ladder following the Warriors' heavy round three loss to the Broncos.

The Roosters finally lived up to pre-season expectations to overcome pressure in front of a 15,577-strong home crowd, while it was a disappointing result for the Dragons with a grand final spot on the line, who went away from what worked well against the Warriors last start to finish the competition in third spot.

Hartigan opted for changes before the clash after a lacklustre fortnight in attack with Zahara Temara's move to halfback proving a masterstroke as the Tricolours clicked into gear immediately.

Hartigan said it was a decision he had to make after two disappointing losses.

"I think it's been more frustrating for the players - if you look at the side we recruited, I think they just thought it would happen," Hartigan said.

"Credit to the 17 that played, they were great.

"We were every disappointed round one, we got better against the Broncos, then some things fell into place today and we plan on getting better next week.

"I'm happy for the girls. It was a big weight off their shoulders now knowing that they're now into the first ever grand final against the Broncos."

St George Illawarra's right edge defence was dominant last week but had no answers as the Roosters created two easy overlaps for Simon to dive over twice in the corner within eight minutes.

"We felt like we needed to play a bit more direct, we needed to hold the Dragons up a bit to get some ball to Issy (Kelly) and Taleena (Simon) and that paid off," Hartigan said of his left-side centre/wing duo.

"There's a lot of instinct in that girl (Simon), she's very talented.

"She had a great week at training and identified that she wanted touch the ball a bit more."

Despite sideline goal-kicking being an issue in Maddie Studdon's absence with Temara missing five conversions, the Roosters were content to go up by fours and extended their lead out to a 12-point advantage with Simon landing on an awkward kick that Dragons fullback Honey Hireme failed to ground in-goal.

Hireme had an evening to forget after a player-of-the-match performance last week with Sam Bremner again ruled out late with a toe injury.

A set play from the scrum after halftime delivered Simon and the Roosters' fourth of the evening with Karina Brown finding the winger out wide on the run.

Another Dragons error from a Temara cross-field kick enabled Roosters debutant Brydie Parker to latch on to a gift four-pointer to stretch the lead out to 20 points midway through the second half.

The Red V were denied a try late in the game and continued to make errors as the Roosters completed a shut-out performance with Victoria Latu crashing over the line to set up a rematch with the Broncos on grand final day next week.

Dragons coach Daniel Lacey said despite blowing a chance of reaching next Sunday's first ever NRLW, he remained proud of his side's campaign in the competition.

"It's pretty sad in the change room," Lacey said.

"But I've addressed the group and spoke to them about how proud I have been throughout this whole process.

"We can put it down to that 60 minutes if we want but I'm looking beyond and what we've done leading into this game.

"From the word go it didn't go our way and we were chasing our tails from the very start but we kept chasing until the end and we're pretty proud of that." 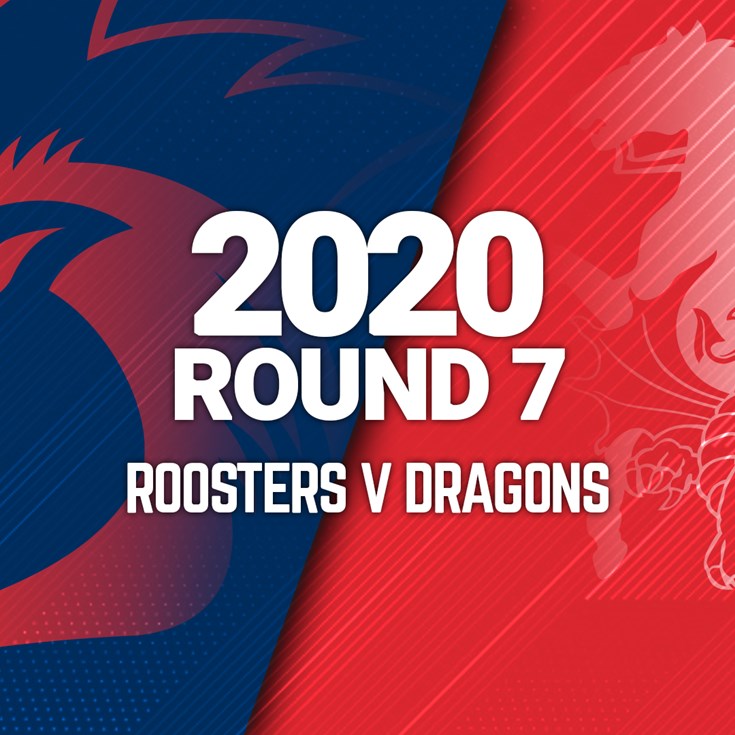 Roosters show resilience to down Dragons