Sydney Roosters Club Captain Mitchell Aubusson has today announced that he will retire from rugby league at the end of the 2020 NRL season.

32-year-old Aubusson, currently the second most-capped player in the Foundation Club’s proud history with 301 games to date, said that after 13 seasons of top-grade football, the time was right to move on to the next chapter of his life.

“This is a decision I’ve thought long and hard about. I’m still really enjoying my footy and love being around the team we have here at the Roosters, but I have no doubt that it’s the right time to make this call,” said Aubusson.

“I remember as a 15-year-old growing up thinking I'd love to just play one game of first grade, and to be able to reflect on the career I’ve had so far, and to have done it all with the Roosters is something I’m incredibly proud of. The Sydney Roosters Club and everyone who’s a part of it means everything to me.

“There are many people who have played an important role in helping me in my career throughout the years, and I’d like to extend my thanks to them all, right back to my junior clubs the Ballina Seagulls and Mittagong Lions.

“I was lucky enough to be recruited to the Roosters by the great Artie Beetson, and I’ll always be grateful for that day. I wouldn’t be here without him.

“I also can’t thank the staff here at the Roosters, especially Cath King and Dee Michailidis, as well as our supporters and sponsors enough.

“To our Chairman Nick Politis and our Board of Directors, thank you for your unwavering support. Nick, to you especially. Our Club is so lucky to have had you leading the way for over 40 years now.

“I also want to make a special mention of Trent Robinson. He’s the best coach I’ve ever had, and he’s also a mate. He has challenged me every day, and I’m a better player and man for it. To Craig Fitzgibbon and all our coaching staff, thank you for setting the bar every day, and most importantly for your friendship.

“I’ve been blessed to play with some pretty special people here at the Roosters over the years, many I’m proud to call my closest friends, and I’d like to thank them. To my current teammates, we’re a tight group and I’m so privileged every time I get to run out with you.

“Most importantly, I would like to thank my family; my parents for everything they did to support me, my brothers for always being there to throw a footy around with when we were kids, and most of all my wife Laura and our children Daisy and Odie. They’re the three most important people in the world to me and I can’t wait to spend more time with them,” said Aubusson.

Mitchell Aubusson to us

Sydney Roosters Chairman, Nick Politis AM, said: “Mitchell has been very loyal to the Roosters. He has been with us for more than half his life and is the ultimate professional.

“On behalf of the Sydney Roosters Board of Directors, I would like to congratulate Mitchell on his outstanding career, and thank him for his leadership and incredible contribution to the Club.”

Sydney Roosters Head Coach Trent Robinson lauded Aubusson’s leadership and selflessness both on and off the field.

“It’s hard to put into words exactly what Mitch Aubusson means to the Roosters, because he means so much for a number of different reasons,” said Robinson.

“Mitch is the ultimate club man. He’s a man of high integrity who has selflessly always put the team first. He’s an inspiration to our team and supporters, and it’s an honour to coach him.

“Looking ahead, on behalf of the playing group and everyone at the Club, we wish Aubo and his family all the very best for the next chapter of their lives, but in the short-term, we look forward to seeing out the season together,” he added.

At the conclusion of the 2020 season, Aubusson will assume a role within the Club.

“I’m looking forward to taking on the new challenges in my post-footy career, but right now, my main focus is on the job we have at hand for the rest of this season,” said Aubusson.

Player number 1067, Aubusson was appointed Sydney Roosters Club Captain in 2017. To date, he is a three-time recipient of the Roosters’ prestigious James Mathews Award for Clubman of the Year (2011, 2015, 2016) 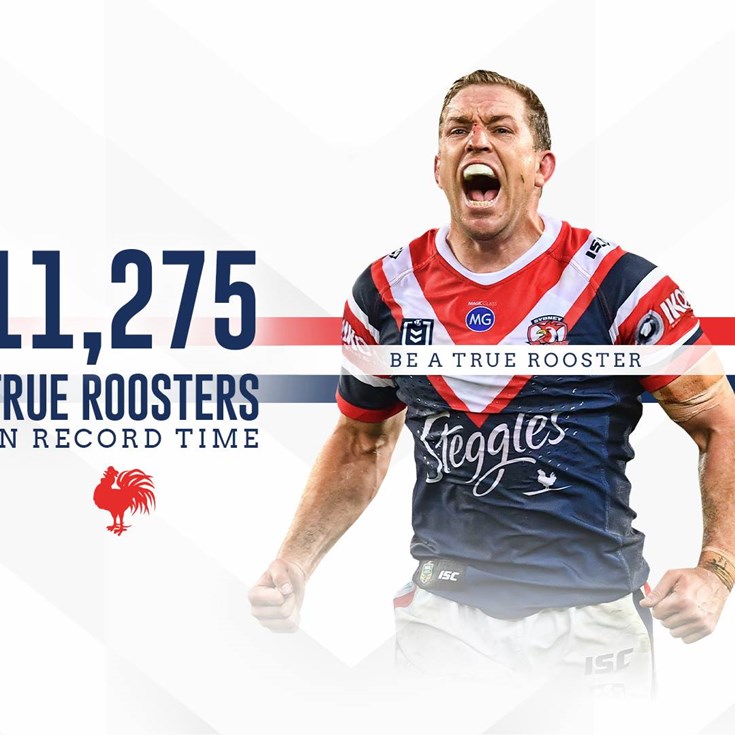 Mindset and mentality unchanged for Roosters ahead of NRLW Grand Final

We Just Need To Execute | Foliaki