Wests Tigers coach Ivan Cleary has named Tuimoala Lolohea at fullback for their opening round clash against the Sydney Roosters on Saturday night at ANZ Stadium. Pre-season speculation suggested it would be Corey Thompson who would get the nod in the custodian role, but he has been named on the wing.

David Nofoaluma has been dropped to the four-man reserves list, while second-rower Chris McQueen has surprisingly being named in the Intrust Super Premiership.

Thompson will start on the wing and Robbie Rochow is the surprise inclusion to start in the back row.

Matt McIlwrick has been dropped to the reserves list. Starting in his place is recruit Pita Godinet, with fan favourite Benji Marshall to come off the bench.

Roosters coach Trent Robinson has opted for Mitch Cornish to partner Cooper Cronk in the halves, with Luke Keary named on an extended bench for the Tricolours.

The higher you climb, the harder you fall; that is what the Sydney Roosters will look to avoid as they are expected to perform consistently and finish the season challenging for the minor premiership with a roster of their calibre.

As for the Tigers, they are coming off a disappointing season by their own standards but they do have a fresh set of recruits to call upon and get themselves back in the top eight race. Having recruited more players than any team this off-season, gelling and finding cohesion will be their tallest order.

The key match-up: The props – Jared Waerea-Hargreaves and Sio Siua Taukeiaho up against Russell Packer and Ben Matulino. Wests Tigers got outmuscled through the middle more often than not in 2017 and a big part of their recruitment drive was around correcting that, with the new Kiwi pair ready to explode out of the blocks.

The Roosters are less accustomed to losing the prop battle but it happened in a big way in the preliminary final loss to a Jason Taumalolo-inspired Cowboys outfit and you can bet their middle men are still stinging from that one. With a host of new playmakers in both squads the best platform will decide this.

For Wests Tigers to win: The Tigers (along with Newcastle) are the most-changed squad from last year so might take some time to gel but they can spring a surprise on a Roosters outfit with some key changes of their own if they start well.

They need their cohort of livewire spine players like Josh Reynolds and Pita Godinet to spark some unpredictable play against the structured Roosters to spring a surprise.

For Roosters to win: Everyone already expects them to so their biggest challenge will be keeping a lid on expectations and sticking to their task if things don't go to plan early. It's basically exactly what happened in the trial win over Manly, when they conceded three tries before they touched the ball but came back to edge a win.

With Cooper Cronk's experience and James Tedesco's freakish attacking skills, the Roosters have the capacity to come home over the top of any side so long as they stay in the arm-wrestle and stay composed.

Wests Tigers stat attack: The black and golds conceded the most running metres of any club last year, with 1646 per game through the regular season. The new names in the forward pack will need to keep a lid on the Roosters forwards' running game.

Roosters stat attack: The Tricolours finished second last season despite notching the highest number of errors of any club through the regular season, with 272. Centre Latrell Mitchell was the worst individual offender with 30. In the early rounds with combinations still forming, keeping those errors under control will be vital.

And another thing: Star Roosters recruit James Tedesco will have plenty of eyes on him up against his old club. Being a Tigers home game, the Campbelltown product will likely endure the highly unfamiliar experience of getting booed by Tigers fans. Tedesco has also scored five tries in his past four round one appearances – will he maintain that stunning strike rate to the detriment of his former teammates?

The prediction: Roosters by 14 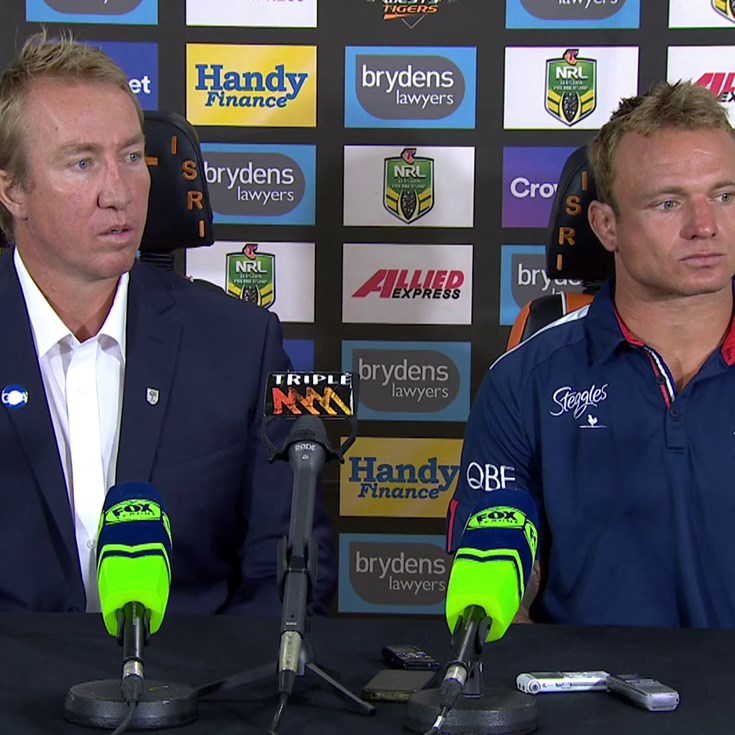