A 12-minute hat-trick to Latrell Mitchell and rampant performances from James Tedesco and Joseph Manu helped the Sydney Roosters snatch the 2018 minor premiership with a 44-10 thumping of Parramatta at ANZ Stadium on Saturday night.

The Tricolours needed to win by 27 points or more to secure their fourth minor title in six years after Melbourne's loss to Penrith but their mission looked unlikely as the Eels went with the visitors for the opening 50 minutes.

But a swing of momentum in the second half – which saw Mitchell Moses and Michael Jennings sin-binned at separate periods for professional fouls – sparked the visitors to the big win with five tries in the final 25 minutes.

Manu and wing partner Blake Ferguson were enormous for the Bondi outfit, running for a combined 526 metres for the clash.

After a lacklustre fortnight in attack, Trent Robinson's men were in cruise control and took five minutes to get on the board with a simple backline shift involving Cooper Cronk, Luke Keary and Tedesco resulted in Manu strolling over on the right edge.

A dreadful last tackle play from Mitchell Moses enabled the Roosters to extend their lead in the 28th minute with the Eels caught short down the right edge once more – Manu sending Ferguson over untouched.

Parramatta improved their last-tackle options in the final 10 minutes of the first half and were rewarded before half-time when David Gower broke past a limping Boyd Cordner and found Jarryd Hayne in support.

Fans returning to their seats would have missed Ferguson split the defence immediately after the break but a final kick from Luke Keary was fumbled by Tedesco with the tryline in sight.

Keary and Ferguson redeemed themselves just three minutes later with Keary floating a cut-out pass for the winger to dive over the line for a double.

With a 14-point advantage it looked as though the visitors were on their way for another four-pointer but a jaded backline movement to the left turned ugly as Cordner left the ball behind him for Bevan French to race 60 metres to the line.

The sin-binning of Moses killed off any hope of a miracle win as the Roosters ran in two quick tries and eyed a final shot at the minor premiership race.

Daniel Tupou strolled over on the left edge, before Mitchell carried three defenders over the line in a disrupted night for the goal-kicking centre, who struggled following a heavy shot in the opening half.

Despite a remarkable try-saving effort from French, another four-pointer to Mitchell stretched the lead out to 24 points – three shy of the magic number.

As Moses returned to the field, Jennings departed and the Roosters ran in another three tries to set up a 34-point lead.

Mitch Aubusson did enough to draw in Brad Takairangi and find Cooper Cronk in support for Tedesco's first of the evening.

Parramatta had a late chance to narrow the gap but couldn't break the Bondi wall. In the only concern for the Tricolours, Mitchell struggled with a leg injury late but remained on the field.

The Roosters will avoid playing South Sydney in the first week of the finals with their opponent all but certain to be the Sharks.

News and Notes: Trent Robinson became the Roosters' longest-serving coach on Saturday night... Blake Ferguson scored the 100th NRL try of his career in the first half... It was Latrell Mitchell's second hat-trick of the season and of his career... Crowd: 11,543. 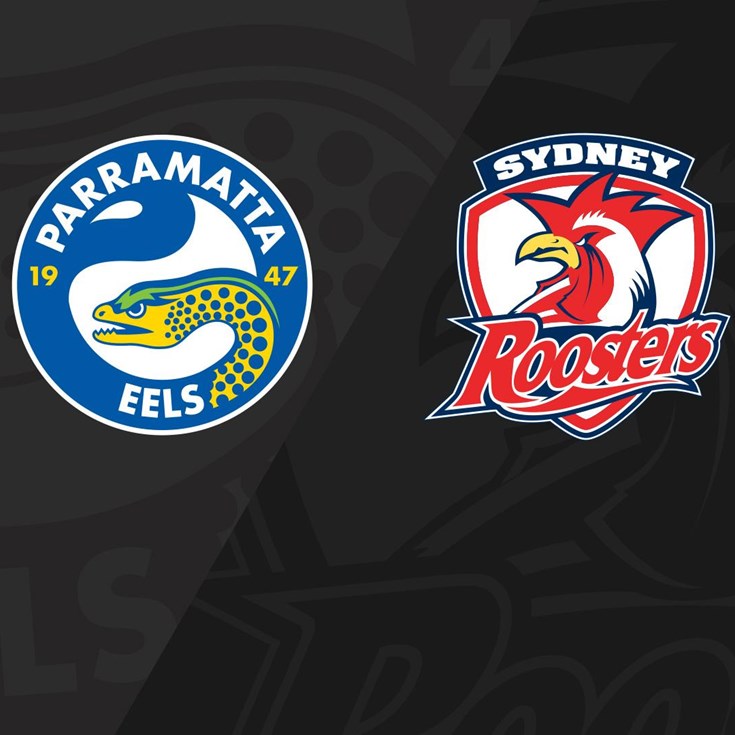