In the most dizzying contract merry-go-round in recent memory, Cronk's move to Bondi set heads spinning like no other this time last year.

Against a battered and bruised Sharks line-up, Cronk sliced and diced the Shire men with his prize-winning boot, scoring a try and setting up another from kicks, and then nailing the field goal that doubled as the final nail in the Cronulla coffin.

Trumping the former Melbourne maestro was Tedesco, who twice chimed into the line for critical tries either side of halftime to go with his three line break assists, eight tackle busts and 239 metres.

While the Roosters marquee men were flying, Cronulla's co-captain Wade Graham was floored with what is feared to be a cruelly timed ACL rupture.

Fellow skipper Paul Gallen also had to overcome a virus that laid him low in hospital earlier in the week, but for all their grit and guts the Sharks now face a six-day turnaround into a sudden-death clash with Penrith next Friday.

The Tricolours meanwhile are into a fourth preliminary in five years and have a precious week off, sorely needed after a rough and ready affair at Allianz Stadium.

When Cronulla had clawed their way to a 12-10 lead early in the second half, Cronk and Tedesco stumped up with the money plays.

A try-assist each in the 51st and 56th minute from the pair meant the Roosters were never headed in the dying stages, despite the Sharks throwing Valentine Holmes, the kitchen sink and then some their way.

Just as telling as Cronk's prowess near the line was his ability to consistently boot his side downfield, with coach Trent Robinson paying tribute to both his No. 7's game management and his teammates dogged defence.

"You could see Cooper's control over that game," Robinson said.

"Kicking the ball back to them the way that he did, we were under some pressure there in the second half and he had to get he ball away... And he just kept doing it consistently.

"That's what you defend all year for, you don't just find it in a week, you set it up over the course of a season. If you're going to hold a team in semi-finals to two tries, you're going to win games."

From the outset Cronulla hurled whatever they could get their hands on at the minor premiers, emerging with an early 4-0 lead when Sosaia Feki snapped up a no-look pass from Ricky Leutele.

Cronk soon put paid to that though with a 12th minute grubber that turned to gold for the Roosters' million-dollar Midas, the ball bouncing off Graham for him to regather and score under the posts.

That Graham went down in the same play with the knee injury that ended his night, and most likely his finals campaign, was simply salt in the wound.

Out the other side of a Cronulla penalty goal a 6-all deadlock ensued until Tedesco sprang to life, sending Joey Manu sliding over out wide in a picture-perfect right-side shift.

Latrell Mitchell started the second half in ignominious fashion, catching Josh Dugan in an awkward crusher tackle that may warrant further inspection from the match review committee despite Mitchell not being reported.

From the resulting possession Cronulla snuck ahead again.

Edrick Lee pounced on a pinpoint Chad Townsend grubber for a 12-10 advantage, before Cronk and Tedesco swung into gear with their own five minutes of magic.

The Sharks never bowed, with Holmes, Townsend and Matt Moylan probing until the end. Their efforts looked to finally bear fruit when Luke Lewis charged onto another Townsend grubber with the clock winding down.

But with the Midas touch of his big money teammates, Mitchell snuck his hand in under the Steeden and forced an error from the Cronulla veteran, sending the Roosters back to the well and a grand final qualifier once more.

News & Notes: Since claiming the 2013 title, this was just the Roosters fourth win from their nine finals games, with all of those victories coming at Allianz Stadium... 21 of the Sharks 24 matches this season have been decided by 12 points or less, the most Parramatta since Parramatta in 2000 (also 21)... Joseph Paulo's 166-game finals drought continued when he was cut from Cronulla's game-day 17. He has played in four teams that have made the semis (Panthers 2010, Sharks 2016-18) but is yet to take the field in any post-season fixture... Crowd: 24,588. 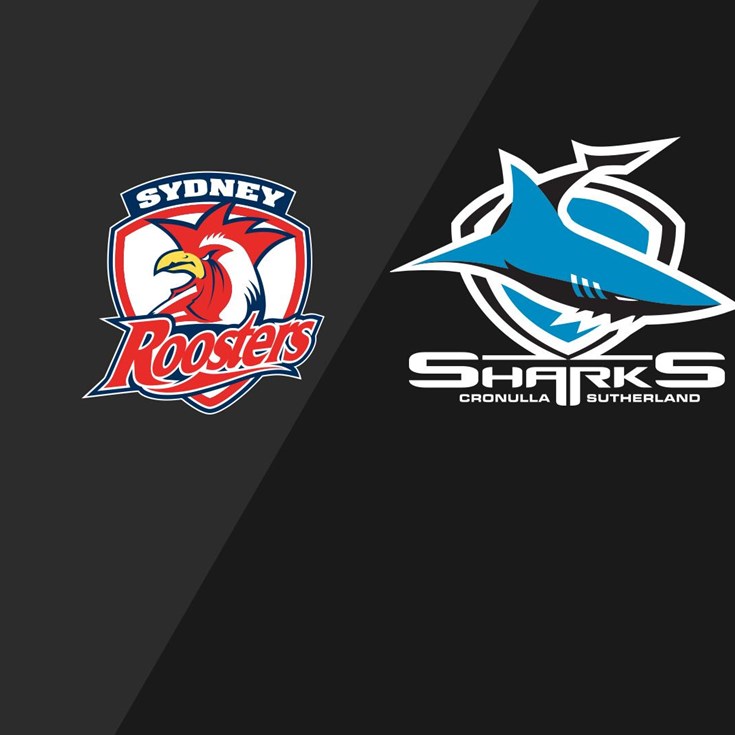