Jake Friend has returned from injury as the heavy-hitting heart and soul of the Roosters' premiership defence, playing a pivotal role in a thrills, spills and battle of wills 20-10 Anzac Day win over a gutsy St George Illawarra.

With 38,414 packing out the SCG, rugby league's Anzac combatants turned on a spectacle for the ages, the Tricolours skipping to a 14-0 lead that the Dragons' next generation gamely threatened to reel in.

Friend proved the match-winner after a month out with a shoulder injury, laying on one try with sleight of hand and another with a brutal shot on Matt Dufty, finally extinguishing the Dragons comeback.

Not that his bid for a maiden Queensland Origin jersey needed it, but the nuggety hooker threw in a game-high 47 tackles a 40-20 to go with it, despite also carrying an ankle issue for an hour of the match.

"He actually got busted after about 10 minutes," coach Trent Robinson revealed after the game.

"He was hobbling there for nearly the whole game.

"But Jake, I think that was one on memory more than practice. That's what guys of his stature can do. That was a big one."

In managing to withstand a brilliant Red V fightback, the premiers brought up their sixth win from seven games, a feat not managed at Bondi since 1999.

The defending premiers sit atop the NRL ladder as a result, but not until a 77th minute match-winner to Siosiua Taukeiaho was this one sealed.

It was Friend's shot on Dufty, a late kick chase that the skipper of course led, that gave Taukeiaho his passage to the tryline.

It was a fitting reward for the Tongan powerhouse's monster effort that featured 253 running metres, 23 runs and 20 tackles in 54 minutes, prompting high praise from Robinson afterwards.

"I get excited when Teddy [James Tedesco] gets the ball with just a bit of space," Robinson said.

"And you're going 'come on Teddy go'. Or Latrell [Mitchell].

"Siua has rare opportunities. But I like it when he just gets that little bit of space. You sort of start rising out of your seat and credit to him.

"He works hard on that, that's the former centre in him coming out and now he's a front-rower. He's learnt the tough bits and then he gets the joy of scoring a try like that every now and then."

For 40 minutes it was only headed one way, the Roosters enjoying 60 per cent of possession and helping themselves to a couple of tries, their opponents making a whopping 203 tackles to 107 in return.

Taukeiaho seals it for the Roosters

Upon the resumption, Red V rocket Dufty produced some handy figures, and downright show stopping speed of his own, beating five defenders in a scintillating 55-metre try that turned the contest on its head.

And it followed a hard-earned redemptive touch down for out-of-position rookie Zac Lomax, whose 48th minute try started the comeback.

A half hour earlier it was Lomax's error, fielding a bomb on the wing, that started the Roosters rot and a terrific afternoon of high-octane footy.

By that point Lomax, Tim Lafai and Tedesco all had try-saving tackles to their names.

But Lomax's mistake under the high ball had Latrell Mitchell over for the first try of the contest, a deft Daniel Tupou offload paving Mitchell's path in the 15th minute.

The NSW centre then had a second denied by the bunker for obstruction, on-field officials doing the same to Lomax's retort a couple of minutes later, finding a Euan Aitken pass had travelled forward beforehand.

With pressure mounting on the Dragons, Friend then chimed in.

His 40-20 led the Roosters downfield, his short ball for Angus Crichton to power over establishing the 14-0 halftime lead.

Dufty breaks the Roosters open up the middle

Out the other side of the break the Dragons rallied, then ran with it as their defensive load eased.

But while Friend had a field day, Hunt – a lead contender for the same Maroons No. 9 jumper – was struck down.

A shoulder injury completed an unhappy afternoon for the Dragons half, forcing him from the field for a cliffhanging final 12 minutes that featured breaks and mistakes from both sides.

Dufty's fumble wound up the most critical, but any number of moments could have swung this one.

In the end it was Friend's crunching hit, with Taukeiaho galloping 20 metres to touch down under the posts, that had the final say. 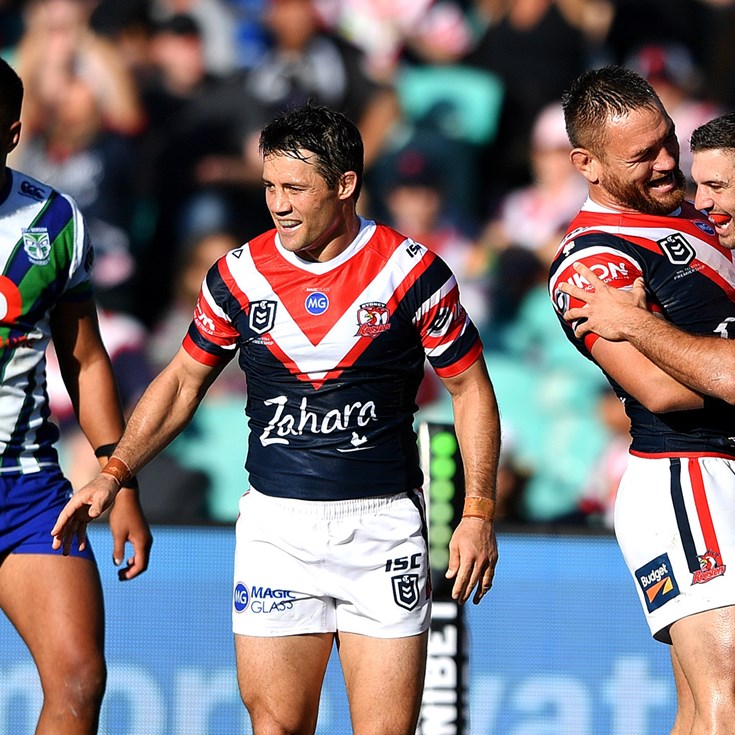 Roosters put Warriors to the sword at SCG

How a trip to the Somme shaped Roosters' Anzac spirit

Roosters to focus on up-tempo game on speedy SCG surface

Roosters Bounce Back With Win Over Bulldogs