Twenty-five long years after Mark Coyne broke NSW's hearts in the dying minutes, the Blues have got their revenge.

The NSW No.1, the player of the series, finished off the lead up work of Mitchell Pearce and Blake Ferguson to give NSW back-to-back series wins for the first time in 14 years.

In the previous seven deciders, the Blues fell short.

This was final game of the series. The final chance for both teams.

For Mitchell Pearce, his final shot at redemption.

The most maligned man in State of Origin history, walked down the seemingly never-ending Blues tunnel to the field with more to lose than gain.

So it was only fitting the punching bag of Origin would throw the pass with the game on the line that would provide NSW with the chance to break the hearts of millions north of the border.

With the scores level and only seconds on the clock, Pearce found the ball in his hand.

With the defensive line swarming in, you wouldn't have blamed him given the scars of yesteryear if he went for the safe play.

But he pulled the trigger. Said goodbye to the demons that have haunted him and threw an all-or-nothing cut-out pass over the top of the Queensland defence to put Tom Trbojevic and Blake Ferguson into open space.

Ferguson flirted with the touchline, but turned it back on the inside to Tedesco to do the rest.

The odds were stacked against Queensland from well before the whistle, but someone forget to tell them that.

The energy in Queensland's defence in Perth was virtually non-existent, but two weeks later they swarmed NSW like termites to timber.

Walters used profanities to describe his side's opening to game two, and he wouldn't have been pleased to see his side barely making it five metres from their line from the kick off.

Those frustrations would have been amplified when the Maroons conceded back-to-back penalties to gift the Blues an early 2-0 lead.

However it didn't take long for the Maroons to take the ascendancy, with debutant Corey Norman showing his deft touch with his less favoured foot to roll one behind the Blues and set up Felise Kaufusi for the first try of the night.

The referees were far more involved in the contest than they had been in previous games this year, blowing 10 penalties in the first 28 minutes – the last leading to a Queensland penalty goal to extend their advantage to six points.

NSW were struggling to get themselves into the contest, however a runaway James Tedesco gave them their first real attacking raid of the night, allowing Paul Vaughan to crash over from close range to level the scores on the stroke of half time.

Unfortunately for Queensland, Michael Morgan's night came to an abrupt end early in the second half when he fell victim to some friendly fire, copping a stray elbow to the head from teammate Josh McGuire.

Morgan came into the game under a cloud having copped a heavy concussion against the Dragons leading into selection, with his latest setback expected to see him miss an extended period under the NRL concussion guidelines.

The Maroons were knocked again soon after when the brute strength and sheer speed of James Tedesco saw him carry two Queensland defenders over the line to give the Blues somewhat of an underserved lead.

The Maroons threw everything at the Blues for the first 53 minutes, yet somehow Fittler's men were on the right side of a 14-8 score line.

Suddenly, the pendulum swung. Just like that, NSW went from the brink of failure to total control.

On the back of a strong run from David Klemmer, Damien Cook took advantage of some tired Queensland defence, hitting the afterburners as he stood up Munster to score a special individual try.

And just like that NSW led 20-8 with a quarter of the match remaining.

Gaps turned into giant Queensland holes, and their hands began to fail them. NSW had their foot on the throat, but with the shield in sight, released the pressure.

In typical Queensland fashion, they didn't die wondering. So when Josh McGuire slipped through some tired NSW defence to score, the Blues were to left to wonder if history was about to repeat itself.

The demons of yesteryear grew even louder soon after when Ethan Lowe charged down a Maloney kick, setting up for Daly Cherry-Evans to put Josh Papalii over for a try which was converted by Lowe to level things up with two minutes remaining.

It looked certain Queensland would do it again. It looked done, done, done.

But in Origin, you learn to expect the unexpected. 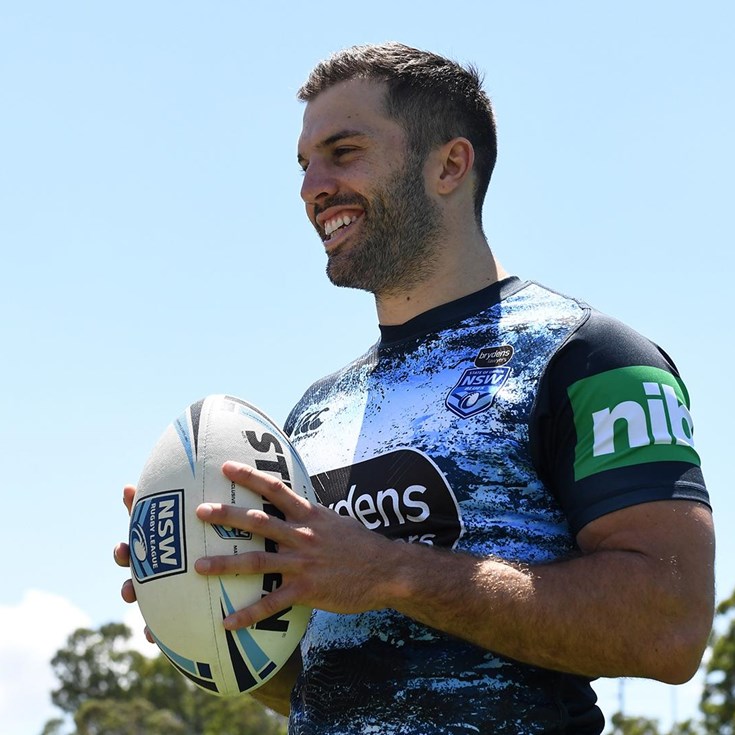