The Roosters handed the Broncos the worst defeat in their history with a 59-0 thrashing at Suncorp Stadium to confirm the three-peat is very much a goer.

The Broncos players have spoken in the past months about how their pre-season had been fired by the goal to "never again" experience the 58-0 humiliation they suffered against the Eels in last year's elimination final.

It only took four premiership games to sink even lower.

The Roosters piled on 10 tries and gave the Broncos a rugby league lesson for the ages.

The absence of Roosters talisman James Tedesco, who pulled out on game day with a high fever, did not assist the Broncos one bit.

Brett Morris shifted from wing to fullback and had a blinder of a game in attack and defence.

His first-half display was devastating and included two try assists and two line-break assists as the Broncos were torn to shreds up the middle and out wide.

The 29-0 lead by the Roosters at the break also handed the Broncos the worst first-half deficit in the club's history.

The Roosters led 4-0 early after brilliant play by the Morris twins on the back of a typically slick catch and pass in the one motion by Luke Keary.

Brett Morris unfurled the final pass for Josh to half-volley and then cut back inside a bevy of Broncos to slam the ball down after a classy swivel.

Joseph Manu was in minutes later after a sweeping left to right play by the Roosters which was executed to precision. Kyle Flanagan landed the sideline conversion and at 10-0 after 12 minutes there were already ominous signs for Brisbane.

The next period of play belonged to Victor Radley. The old school lock nailed Tom Flegler with a jarring tackle that jolted the ball free and would have done former Rooster master defender Trevor Gillmeister proud. Minutes later Radley put his head down from 10 metres out to score under the sticks.

Brett Morris then pulled off a cracking try saver on Corey Oates before the Roosters waltzed downfield. Keary and Flanagan combined to put Angus Crichton over to expose how badly the left side of the Broncos defence was falling apart.

Friend and Radley combined brilliantly down the middle to send Flanagan in under the sticks and the procession continued.

Keary popped over a nonchalant field goal on the cusp of half-time to give the away side a 29-0 lead at the break.

The Broncos had made 227 tackles compared to the Roosters 132 at half-time. The completions made just as bad reading for Anthony Seibold's team with nine from 14 for Brisbane compared to 21 from 24 by the Roosters.

The second half was more of the same. Isaac Liu busted through feeble defence in the middle to send Keary in under the sticks. The Roosters toyed with the Broncos for the remaining minutes. With Jesse Arthars in the sin bin, Keary ran sideways at will to put a barnstorming Lindsay Collins through a giant hole and in for a cracking try against his former club.

Crichton went from dummy half to score with consummate ease. Then a right-to-left training drill by the Roosters brought up the half century in the 71st minute with Tupou the beneficiary. When Keary sent Brett Morris over in the 74th minute the massacre was complete.

The Roosters are looking red hot to defend their title. The Broncos have Manly at Gosford to look forward to next Thursday and another thrashing unless they make massive improvements in every facet of play.

Coach Anthony Seibold said that was no excuse.

"I take responsibility," Seibold said. "I put out a young side, it was the best side we could come up with in the circumstances with injuries.

"I don't think we are mentally weak, but there's some big lessons.

"We are trying to build something sustainable. I can't offer any excuses, we picked the best side we have available, I feel for our members and supporters, the two times we have been towelled up [in the past two weeks], it's been men against boys.

"We have $4 million of guys on the sideline, we have a young team and this is part of their development, but I felt as though we were bullied the last two weeks."

The Roosters lost the opening two rounds of the season but have hit back since the game's resumption with emphatic wins over the Rabbitohs and Broncos. Coach Trent Robinson said he was not concerned by pundits' initial doubts.

"That is a lot of external stuff, noise, which we needed to keep us interested," Robinson said.

Conversely he said the back-to-back wins were not reasons to be "jumping for joy".

"We are going to be content about our performance," he said.

"I thought we came with a good attitude to start the game and set it up with 13 sets in  a row, nothing spectacular but some good execution at times.

Robinson shares his views on by-products of new rules

"We got the lead and while the whole second half fell away as a game we picked up the opportunities when we could. They were hungry at half-time and hungry at the end, hungry enough to keep them to zero."

The only sour point for the Roosters was a late arm injury to Radley which forced him off.

"He has got a sore elbow but I don't know how bad it is. He is making jokes in the dressing room but has a sore arm that he can't move a lot," Robinson said. 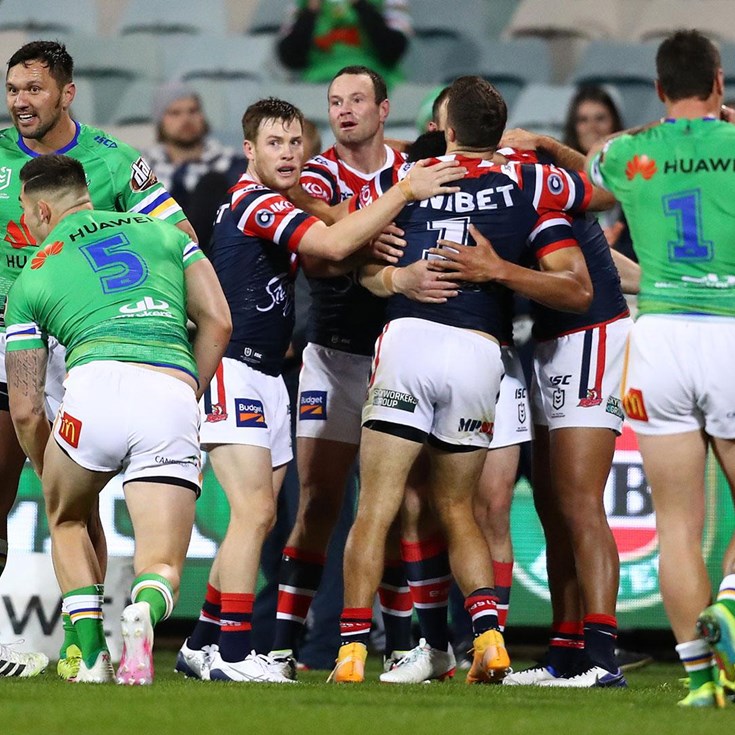 Most Streamed Of 2020 | Raiders v Roosters