James Tedesco scored a treble and set up another two as the Sydney Roosters maintained their red-hot momentum since the NRL's restart with a 42-6 victory over Canterbury at Bankwest Stadium on Monday night.

The premiers' third straight win started in similar fashion to their 59-0 onslaught against the Broncos 10 days ago with the Bulldogs having no answers as the Tricolours piled on four tries inside 25 minutes.

Tedesco looked in third gear as he sent Angus Crichton over for a first-half double before finishing off two plays in another ominous sign for the NRL competition that the world's best fullback continues to be a class above.

His third try of the night – where he slipped past former teammate Dylan Napa close to the line – completed just the second hat-trick of his NRL career, while the rest of his team contribution included five line-break assists and 10 tackle busts.

"He was … he was Teddy," Roosters coach Trent Robinson said.

"It was great to watch, forget about being his coach, just watching him move around the park ... across the wider game we get to see it when the camera doesn't, the way he moves around, it's exceptional.

"Then they get into a very good mindset to use that often and that's Teddy.

"Teddy's got a very good skill set, a tough mentality, a skilful mentality and he's able to reproduce that often."

Get Caught Up: Round 5

The inexperienced Bulldogs left edge of Jake Averillo and Lachlan Lewis had headaches early as the Roosters targeted them in defence but the Bulldogs produced a solid – if not scrappy – 20-minute period after halftime to halt the momentum.

A try to Kieran Foran late in the game was reward for Dean Pay's outfit and ended the Roosters unanswered 95 points they had produced over the past three weeks of the competition.

Kyle Flanagan got into the swing of things to deliver another four-pointer for his new club when he finished off a Brett Morris bust on the right edge after a crafty flick pass from Joey Manu in the lead-up.

The Bulldogs spent some time pressing the line before the break with Foran and Christian Crichton going close to scoring until two desperate plays from Tedesco and Daniel Tupou denied them last minute in typical Roosters defence.

An Averillo line break came to no avail with a try-scoring opportunity beckoning with Tedesco producing the try-saving effort late.

"We didn't physically match them. The second half for the first 20 minutes we competed hard but then came up with a couple of tackle one errors," Bulldogs coach Dean Pay said.

"We had about seven tackle-one errors against a quality team like that. They're the things we need to get better at really quickly."

Tedesco's finishing of a Sitili Tupouniua bust produced a near-perfect opening from the Tricolours, before their final two tries in the final 10 minutes blew the scoreboard apart.

Only an incident from Crichton, who was placed on report for a late hit on Lewis, is a concern for the Trent Robinson leading into Saturday night's blockbuster clash with the Eels.

Canterbury lost Aiden Tolman pre-game due to a COVID-19 scare and although he was cleared by medical tests, he and English recruit Luke Thompson will be in quarantine for the next two weeks.

Tedesco jinks his way past two Bulldogs for his hat-trick 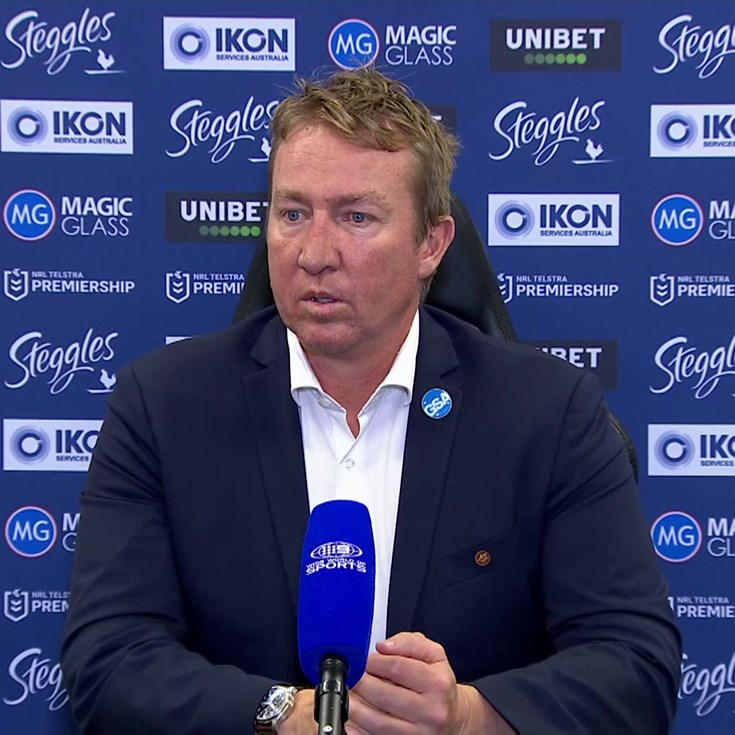