The Sydney Cricket Ground has seen countless half-centuries over the years but the one posted by the Roosters against the Broncos on Friday night may well rank among the most effortless.

The premiers sauntered to a 58-12 victory, backing up the 59-0 defeat they dished out in round four that sparked Brisbane's stunning downward spiral.

"Winning's a scoreline but if you're not seeing some stuff you really want to see then you're not going to get anywhere," said Roosters coach Trent Robinson.

"That was better. It's not finished. Don't jump up and down and get too excited about a scoreline."

Anthony Seibold's departure as coach on Monday failed to ignite a response from the Broncos, their flimsy goal-line defence exposed as the Roosters cruised to a 24-6 half-time lead.

The Tricolours made breaks with ease in the second term, often turning long-range busts into tries.

Roosters captain Boyd Cordner (concussion) and winger Tupou (ankle) returned from lengthy injury lay-offs, while Robinson indicated that Luke Keary (ribs), Angus Crichton (knee) and Sonny Bill Williams could be unleashed as soon as next round.

A brain snap from Joe Ofahengaue triggered the onslaught. Brisbane dominated possession early despite conceding a try as the Roosters made uncharacteristic errors, but Ofahengaue's knee to the head of an already dazed Jake Friend in the 13th minute landed him on report and turned the tide.

"There's ways to be tough in our game and that's not it. That didn't cause the concussion so I don't want extra weight to be put on that for Joe," Robinson said, adding that Friend was alright after the match.

The Roosters bagged three tries in the space of 12 minutes after the incident to quickly put the game beyond doubt, shoring up their top-four spot while leaving the Broncos in danger of being leapfrogged by the last-placed Bulldogs ahead of their clash with Canberra on Sunday.

Tupouniua opened the scoring simply in the fifth minute after he charged onto a James Tedesco short ball and reached the chalk with momentum.

Even with Friend off after a head knock – from which he didn't return – inflicted by teammate Jared Waerea-Hargreaves, the Roosters had no dramas attacking following Ofahengaue's game-changing indiscretion.

Lock Isaac Liu ripped through the middle to make it 12-0, then Tedesco streaked away to score after Tupouniua and halfback Kyle Flanagan combined.

Robinson could unleash SBW and more against Raiders

Tedesco turned into a pinball moments later, bouncing and bumping away from several challenges, allowing Flanagan to exploit the frazzled defence on the next play by providing a lovely inside pass for Tupouniua to claim his double from close-range.

Just as Roosters fans dreamed of another shutout, Broncos centre Kotoni Staggs pounced on a loose pass from Boyd Cordner and raced 70 metres to at least ensure they left with something. But Josh Morris and Tupou added their names to the score-sheet in the first five minutes of the second half to extinguish any fantasy of a comeback.

Broncos wrecking-ball David Fifita stormed over in the 55th minute to give Brisbane supporters something to cheer about – though even that may have been hard to stomach given the second-rower, one of the team's few bright spots, is off to the Titans after four more games.

David Fifita storms through the Roosters

Nat Butcher nabbed his first try of 2020, exploding up the guts to finish off a super Roosters long-range effort, before the evergreen Josh Morris was the beneficiary of a slick left-side raid, including a brilliant tap-on by Tedesco, to claim his second.

The left-edge brought more success as Tupou collected his second in the 73rd minute, then Brett Morris crossed on the right at the death as the Roosters raised the bat on hallowed turf.

Tedesco was immense with five try assists and more than 200 running metres.

"I said it about the Morrises last week, but if you want to watch how to play footy in lots of different ways, defensively, offensively, then go and watch Teddy play the game," Robinson said.

"His hunger for improvement – he walks in every day and says OK, I've done that well, now I really want to do this or that."

"People wouldn't realise, I don't think, that he was really disappointed [last week] – we had a long discussion during the week about the way that he played that: 'Come on, let's improve, let's get better'," he said.

"He adjusted that tonight in some areas and then he gets the rewards because he's a physical, quite a dynamic kind of player." 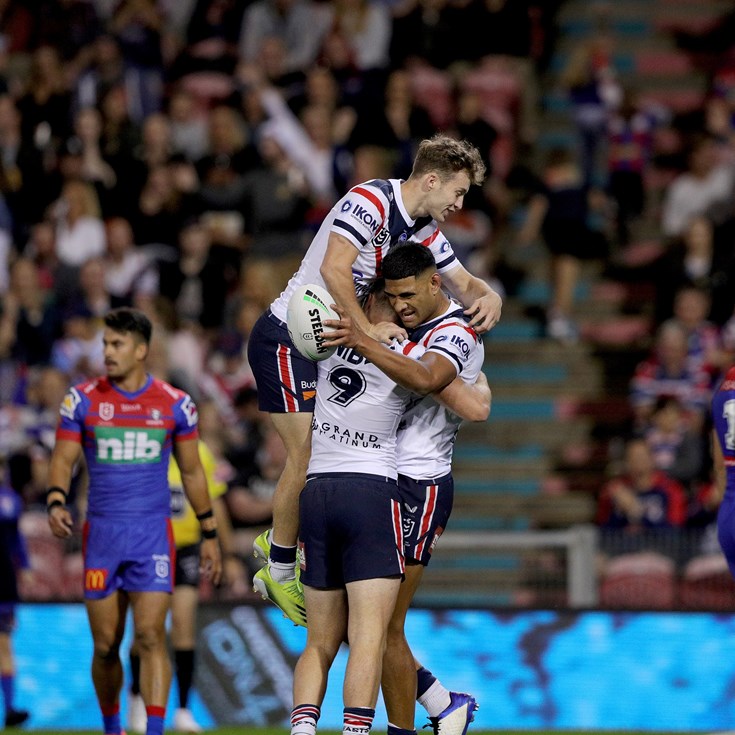