Roosters five-eighth Luke Keary says he is impressed by the improvement this year in the halfbacks of both his own club and this Friday's rivals Penrith, with Kyle Flanagan and Nathan Cleary each silencing plenty of doubters.

Flanagan has bounced back strongly after a short mid-season demotion, going within a whisker of topping the season point-scoring list and finishing with 11 try assists, four tries and 84 goals in his first season in red, white and blue.

Cleary meanwhile entered the year with 81 NRL caps and five Origin starts but at just 22 years of age with big question marks over whether he could step up to control a young Panthers side after the departure of James Maloney.

He has answered every question thrown his way in fine style, guiding his team to a minor premiership.

"He's grown each year," Keary said of Penrith's young No.7.

"He got thrown in there pretty young and you can see he had all the bones to be that guy. It's kind of all come together for him this year.

"It's been really good for him, he's a good person and a good footy player. Of the footy that I've watched he's taken his game to another level."

The many threats of the Panthers' attack

Keary was also full of praise for the way Flanagan bounced back from his demotion.

"He's been awesome. He had to go through that, we kind of all do as young players, you have to step back to move forward," he said.

"He took it really well, found some things he needed to work on and did and came back a better player. He's been good but the real stuff starts this week."

Flanagan wouldn't need any extra guidance heading into his first ever finals series, according to Keary.

"I feel like he's not really the character that needs to be spoken to about that," he said.

"He just goes about his business, knows his role in the team, knows his job. He's been getting it done for us."

Friday night's blockbuster at Panthers Stadium is arguably the match of the weekend and Keary said both teams had changed significantly since Penrith edged a round one win against the defending premiers.

"If you look back on that game you could still feel like they had something there and you knew they were going to be a really good footy team," he said.

"They've obviously gone to another level but it's hard to take much from that … They're obviously in good form and we've watched a fair bit of video and things like that.

"Their defence has been their backbone this year."

Winger Brett Morris said he was in no doubt for Friday night after being a late scratching for last weekend's huge loss against Souths.

"Just a rest, just a couple of little niggles there, we thought it would be a good opportunity to get a little rest in," Morris said.

"We did a similar thing last year actually with a couple of little niggles and had the rest going into the finals and it seemed to work a treat."

Morris said watching the 60-8 loss on Friday was no more fun on the sidelines than it would have been for the players on the field.

"It was a disappointing result, I don't think many people saw that, it was embarrassing for everyone that was out there," he said.

"I was obviously sitting on the sideline and feeling for the boys every time they ran a try in. It got worse. I played in a few games like that where the score blows out and they're not enjoyable. It was a tough night for everyone.

"You've got to take your lessons from those big losses, it's not enjoyable and whilst it hurts you can sometimes use that to your advantage. We know we've got a really good side, we don't have to worry too much.

"You look across our side there's internationals everywhere, guys that have played really big games and come Friday night this is a big game. This is why we play rugby league.

"Penrith are a really young enthusiastic side and they're playing really good footy. They've come up against some tough opposition along the way and accounted for them.

"We played them in round one which feels like forever ago and they were too good for us on that night.

"We've improved a lot since then and I'm not saying they haven't but there's a lot of things that have happened between then and now.

"It's finals, anything can happen and we're in the process now of prepping ourselves for a big game." 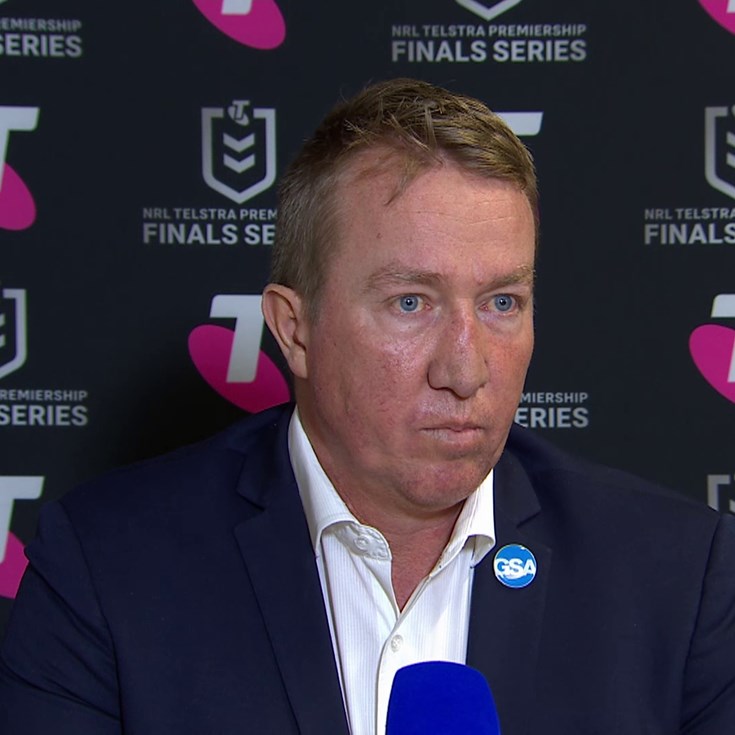 Tedesco fights his way through

Lussick muscles his way over for his first NRL try