Following their 46-4 thumping against the Sea Eagles at the SCG - the biggest Round 1 victory in Club history - the Sydney Roosters NRL squad were in high spirits on Monday morning, with Lachlan Lam, Joseph Manu and Daniel Tupou full of praise for the side's start to the year.

With his confidence building after playing his first game as full-time five-eighth, Lachlan Lam spoke on in his new-found combinations on the left side of the field, and was full of awe of fellow spine players James Tedesco and Luke Keary steering the side around.

“It was good to get the first game out of the way," he said.

“It’s good, we’ve got big Gussy (Angus Crichton) there and JMoz (Josh Morris) and Toops (Daniel Tupou) on the left. We’re slowly chipping away at it there and we just sort of wanted to start solidly on our defence. Throughout the year we’ll chip away at our attack as well, I thought we had a good start and the boys on the right edge did really well.

“Teddy (Tedesco) and Keary were on fire and it was good to be a part of that. I was a little bit nervous but there’s always nerves so I don’t think that’s ever going to change.

"We had a good win, and it’s the first time we’ve had a win in a couple of years (against Manly) and starting the season like that is awesome, but there’s a long way to go still."

We know the strengths of our side and all the combos we’ve built over the pre-season, I was just happy to see it paid off in attack and defence.

Already full of surprises, Lam revealed Tedesco's new side-gig as an author, and elaborated further on the speed of the match as well as Head Coach Trent Robinson's positive reception after the victory.

“He’s not bad is he?” he laughed when asked about Tedesco's performance.

“He’s got a book coming out too called Hat-Trick Teddy which is kind of ironic at the same time. He’s awesome, he trains well and plays well and it’s great to watch.

“The first ten minutes were pretty quick and then it started to slow down a little bit after that. We trained for it in the pre-season – I’m sure other teams did as well – and I think it’s definitely something we’ll look at.

“He’s (Robinson) aware it’s still Round 1 and there’s a long way to go but he was more positive than critical and he let us know he was proud of us."

Centre Joseph Manu attributed the victory to the existing combinations, coaching prowess and enthusiasm from younger squad members, with the side piling on the points despite making some necessary changes due to injury.

“We had a good weekend, it was a good start to the season and we’re looking forward to training and getting started on this week," he said.

“We know the strengths of our side and all the combos we’ve built over the pre-season, I was just happy to see it paid off in attack and defence. In saying that it’s Round 1, we’ve still got a long season and we’re looking to build on what we’ve started.

“Most of it goes down to the coaching staff, and a lot of the young boys as well, when we train against them they all train well. Whoever comes into the side knows they’re putting on the Roosters colours and knows what it means to them and we trust anyone that puts on the jersey."

With new six-again rules speeding the game up, Manu showed plenty of toe on Saturday night, beating his opponents en route to 2 linebreak assists and 2 try assists for his winger Brett Morris, who scored his 11th career hat-trick in the process.

Despite his three-try performance, Tedesco was still in the firing line for the 24-year-old centre, who also spoke on his blossoming combination with the experienced Morris.

The performance can speak for itself. We did a good job out there on the weekend, but we know we can do better.

“It was a bit quick but we expected that," he said of the match.

"The training staff made us train at our best speed, it couldn’t get quicker but it was enjoyable at the same time to throw the footy around and work around the fatigue of some players.

"I was pretty sore yesterday but we’ll step up our recovery and do what we need to. I don’t think much will change.

“He’s (Tedesco) good at everything but goal-kicking I guess, he’s just gotta work on that!,” he laughed.

“Brett's still got it. Scored a few tries and he’s a great finisher. I love having him outside me, he’s taught me a lot."

Modest as ever, Daniel Tupou said that while the Club was pleased with the Round 1 victory, there is still plenty to work on for the long year ahead.

The veteran winger was humble about his flawless defensive nous under the high-ball and praised the performance of his fellow outside backs.

“The performance can speak for itself. We did a good job out there on the weekend, but we know we can do better," Tupou explained.

“We all work as a team and we know our roles, even if we’re out of position. We play for each other and we try to get the job done.

“It’s experience I guess. The height gives me an advantage but it’s just about getting the job done and catching everything that comes my way.

“He’s (Tedesco) an amazing player. I’m fortunate to be outside him, he’s a true leader and an awesome player.

“They’ve (Brett and Josh Morris) got the experience and it was great to see them both score on the weekend, I think it was Brett’s 11th hat-trick in his career which is amazing. It’s pretty crazy."

INSIDE ROOSTERS SHAKE-UP TO MAKE TEDDY EVEN MORE POTENT

IN THE SHEDS WITH BRETT MORRIS 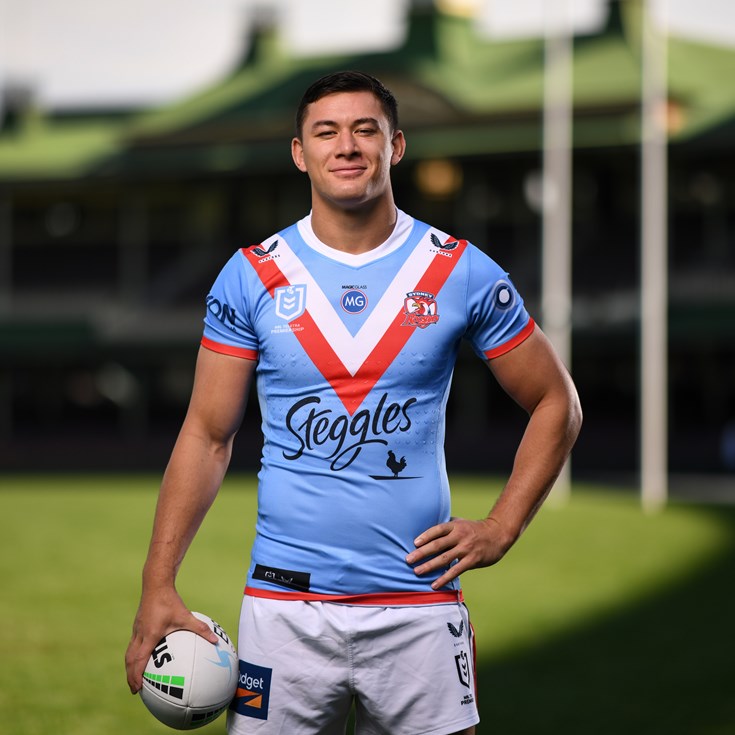