The Sydney Roosters have made it two wins from two games to start 2021, piling on the points against the Wests Tigers at Campbelltown Sports Stadium in a 40-6 win.

James Tedesco, Brett Morris and Sitili Tupouniua all put their names on the scoresheet for a second consecutive week, while front rower Lindsay Collins starred in a dominant display which included two try-assists alongside Luke Keary who conducted the side from the get-go.

In damp conditions that at times resembled a quagmire more than a football field, both teams began proceedings through the middle as the forwards looked to assert dominance, with an early warning shot from the home side thwarted by a try-saving tackle from Collins.

The Roosters would bounce back immediately off the back of some enterprising offloads in the wet, with a banana kick from Brett Morris finding Tedesco on the chest, who touched down for his fourth try of the season.

With the conversion from Siosiua Taukeiaho successful, the Roosters took a 6-nil lead after eight minutes.

Collins would again assert his dominance with a crunching hit on Daine Laurie, while Tedesco and Morris combined to put the Roosters on the front foot with a well-timed pass nearly putting the winger through a gap.

A swinging right-side play saw halves Luke Keary and Lachlan Lam beautifully combine, with quick hands from the five-eighth putting the veteran winger over for his second of the match, who beat Laurie with his own touch of class.

Taukeiaho's second conversion was successful, putting the Red, White and Blue up 12-nil after fifteen minutes.

Wests Tigers would look to add some flashy play of their own, and with a successful Captains Challenge coupled with a six-again call seeing the home side on the board as Jacob Liddle struck through dummy-half.

With Adam Doueihi's conversion going through the uprights, the Tigers closed the gap to six with a quarter of the match played.

Another break from the Tigers was shut down by a scrambling Tedesco, with Easts able to hang on and earn a seven-tackle set, however, an error on the attack would halt their momentum.

With the heavens opening, a trademark diffusal from Daniel Tupou saw the Roosters make their way downfield, while a bone-jarring shot on from Tupouniua gave the Tricolours the perfect opportunity to strike again.

Dazzling footwork from Lam put the Tigers on notice and gave Tedesco the time and space to put in a deft kick and force a line-dropout, while a dummy from Isaac Liu saw the hulking forward fall short just centimetres from the line. Unfortunately for the Tricolours, a dropped ball from a Keary bomb handed momentum back to the home side.

Both teams would go back and forth, with Tedesco poking his head through the Tigers defence, while David Nofoaluma looked to intercept a Keary long-ball in a heart-stopping moment. With sheer weight of possession for the boys from Bondi, the halfback would make amends by putting Tupouniua over the line with a classy ball.

Taukeiaho would make it three goals in a row to put the Tricolours up 18-6 with just five minutes to go in the first half.

Three back-to-back six-again calls for the home side challenged the Roosters' defence with just minutes remaining, but Trent Robinson's men would hold off the Wests Tigers as they went into the sheds 18-6 after an impressive 81% completion rate.

A crusher tackle on Tedesco in the first set on resumption was a sore sight to see for the Red, White and Blue faithful, with the ensuing penalty giving the Roosters ideal field position to start the second half. Unfortunately, a knock-on over the line prevented the side from extending their lead in the wet.

In The Sheds with RoostersTV

The slippery conditions would further cruel the Roosters defence, with the Tigers poking their heads through, but the goal-line defence from the visitors would help set up the next try as Keary would stamp his mark on the contest.

Bursting through the line after fooling the defence with a brilliant dummy, the crafty no.7 showed plenty of poise to throw a reverse flick pass to Brett Morris, who backed up in support to score his double.

Despite the unsuccessful conversion, the Tricolours built on their strong lead, going up 22-6 with just over half an hour left in the contest.

The Roosters would be back at it just minutes later, with Co-Captains Keary and Tedesco combining through the middle, with the mercurial fullback firstly recovering a charge down to give the side six more tackles, then pouncing on his halfback's pin-point grubber to further extend the lead.

Taukeiaho's fourth conversion of the afternoon extended the lead to 22 with 51 minutes played.

The suffocating defence of Easts - highlighted by a crunching tackle from Jared Waerea-Hargreaves on Nofoaluma -  kept the Tigers well in their own territory, and another chance presented itself as pressure from Morris and Joseph Manu saw their opponents lose possession from a high kick.

A seven-tackle set coupled with a penalty welcomed the Tigers back into the contest, but the ferocious defence on their own line once again kept their opponents from scoring as Fletcher Baker took the field to make his NRL debut.

In The Sheds with Fletcher Baker

More ill-discipline from their opponents saw the Tricolours back on the try-line, with the Bondi Wall holding off any attacking raids, with yet another bruising shot from Collins dislodging the ball as the Red, White and Blue looked to continue their dominance.

And dominate they would, with the front-rower emulating his halfback to burst through the middle and float a ball to Baker, who would cap off his afternoon with a four-pointer under the sticks, much to the delight of his teammates.

With Taukeiaho taking a rest on the bench, Tedesco put on the kicking boots as the Roosters took a 34-6 lead with ten to go.

Collins was at it again as a great catch and offload from Joseph Manu saw Morris grab his second hat-trick in as many weeks, while a sideline conversion from Tedesco saw the Roosters hit 40 with five minutes to go.

Despite errors cruelling the final five minutes, it would be the Red, White and Blue leaving Campbelltown with a 40-6 victory, a fifth win in a row against Wests Tigers and an all-important two points. 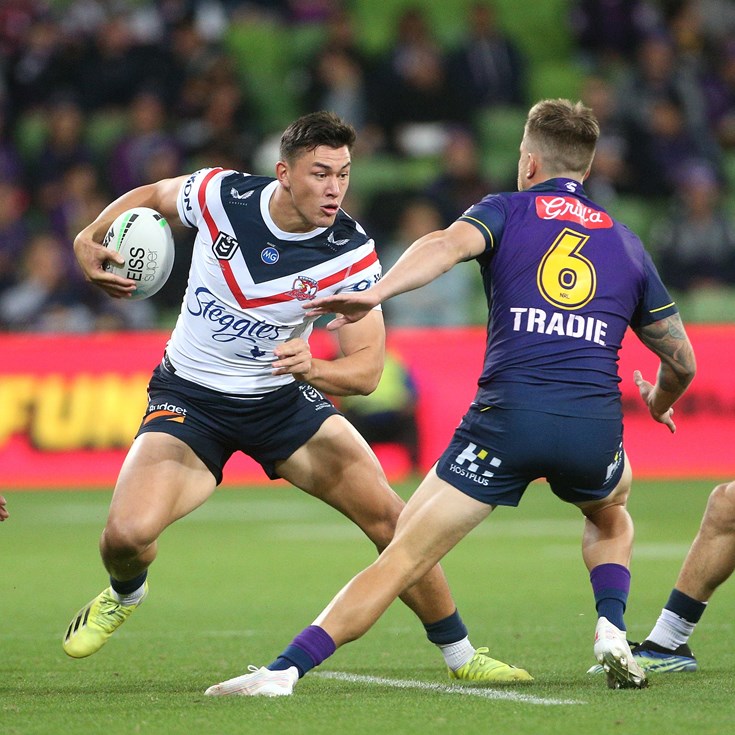