Overcoming plenty of adversity throughout a whirlwind week that included a swift relocation to the Sunshine Coast, the Sydney Roosters have come up with a resounding 34-18 victory against the North Queensland Cowboys at Queensland Country Bank Stadium in Townsville.

With all non-Queensland-based NRL clubs relocating to the sunshine state, the Tricolours have kept in touch with the top four after trailing 12-nil in what was an entertaining match.

Without captain James Tedesco for a second consecutive week due to State of Origin commitments, the Roosters welcomed back Angus Crichton to the line up as Billy Smith continued his return to first grade, with both touching down in the first half.

Playing on a dry track on a sunbathed day in Townsville, both sides began proceedings with expansive play, but it would be the Cowboys who took full advantage of the conditions with a try with Javid Bowen touching down as the Cowboys took an early 6-nil lead.

Easts looked to chance their arm through offloading, but poor ball control and frantic play saw both sides trade errors.

The Roosters continued to display ill-discipline by conceding multiple ruck infringements and handing their opponents more possession and were duly punished by Hamiso Tabuai-Fidow who got over the line to score.

Poor defence saw the Cowboys break through the line once again through Tom Dearden, but the Roosters were saved as the young halfback dropped the ball after tripping over, and from then on it was all one-way traffic to the Red, White and Blue.

The Tricolours wrestled back momentum and were rewarded after applying plenty of pressure on their opponents as Angus Crichton touched down for the side's first try after running onto a well-timed pass from Drew Hutchison.

Although over-enthusiasm made an error on the following set, a try-saving tackle from Jared Waerea-Hargreaves and a clever pickup from Sam Walker saw the Roosters back in control.

With both sides desperate to get on the scoreboard before the break, it was Smith this time who emulated his back rower by running a powerful line off Hutchison to crash over the line.

As time continued to tick down, the Roosters closed the gap 10-12 with just less than five minutes left as half-time approached - but they weren't done just yet.

The Roosters found themselves in enemy territory with just minutes left in the first stanza following an illegal two-on-one strip, and a weaving and darting Walker sent Josh Morris through the line to put them in prime position to add to the tally.

Crichton Onto the Field and Over For a Try

With less than a minute left on the clock, Joseph Manu gave his side the lead with a classic show and go to cross the line, heading into the sheds with the scoreboard reading 14-12.

The second stanza began with high-risk plays from both sides, as they handed one another opportunities to score after making uncharacteristic errors.

Stepping up to the plate, a well-weighted kick from Hutchison forced an error from Tabuai-Fidow, and although the Roosters found themselves on the line, an unfortunate obstruction penalty halted their newfound momentum.

North Queensland looked to take back the lead, but the Bondi Wall endured multiple sets to keep the scoreline intact.

A break from Matt Ikuvalu put the visitors on the front foot, and an acrobatic effort from the hulking winger saw him score his sixth try in two games at the venue.

The Cowboys flexed their muscles soon after though, with a long break from Tabuai-Fidow putting the Cowboys back on the scoreboard following an 80-metres break.

With just over fifteen minutes left on the clock, Drinkwater's conversion saw the scores at 18-all, and a monumental effort from the Roosters was needed.

A powerful run from Manu put the Cowboys on notice, and it was Sitili Tupouniua who crossed soon after to reclaim the lead following expansive play from his teammates.

Walker's converted try saw the Roosters lead return to six with less than ten minutes on the clock.

Both sides threw everything at one another in a desperate attempt to claim the two competition points, and the Cowboys looked to cross through Drinkwater only for the five-eighth to be pinged for a double movement in a relieving moment for the Tricolours.

Walker Scores from a Radley Effort

Not to be deterred, the Roosters iced the match on the very next set as Isaac Liu showed soft hands to put Victor Radley through the line, with the bullocking lock forward caught short of the line just ten metres ou from the try line.

From there, Walker bamboozled the defence at dummy half to touch down as the Red, White and Blue went end-to-end.

Although the Cowboys threw a late scare into camp, it was the Roosters crowing up north as Matt Ikuvalu crossed with just seconds remaining to finish the match with a 34-18 victory. 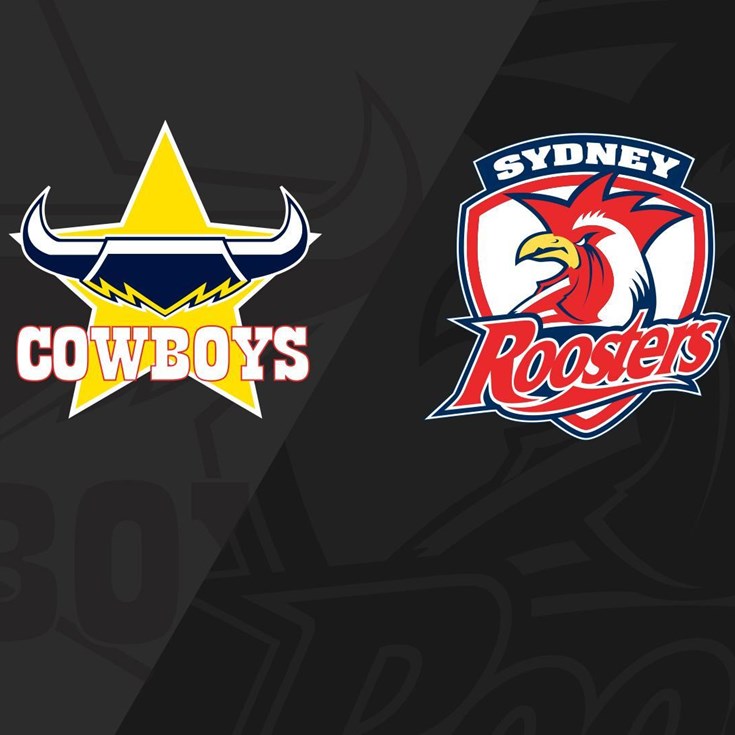 Round 18 Extended Highlights: Roosters vs Cowboys

Round 18 Match Highlights: Roosters vs Cowboys

Manu Breaks Through on the Left