Blues halfback Mitch Pearce is under no illusions about his record in Origin to date but the in-form Roosters general was flattered to be told by coach Laurie Daley that he was not just back in the side – but the side is being structured to suit the way he plays and dominates for the Roosters.

There are those among Blues supporters who feel Pearce's four wins from 15 games (including none from six at Suncorp Stadium and no series wins across six series involvements) should preclude Daley from handing the polarising Rooster further chances.

But there can be no question that of the available players to play No.7 for NSW, Pearce is in by far the best form at NRL level.

In dropping Robbie Farah – a probing rake who likes to run, kick and create from dummy-half – for a tough-as-nails regulation hooker like Nathan Peats, Daley publicly spoke of the style he wants to play this year and that revolves around the halfback running the team. The representative retirement of lock Paul Gallen – a senior figure who demands the ball more often than not – will also shift further control to the halves.

Pearce appeared relaxed and jovial at Sydney's The Star in a sit-down with journalists on Tuesday morning before flying up to team camp at Kingscliff, cracking plenty of jokes in between speaking openly about his pride and gratitude at the faith Daley has entrusted in him ahead of this series.

"I feel really proud to be chosen back in the NSW side," Pearce said.

"To be trusted from the staff to get back in here, to do a job is a great honour. There's a big job ahead of us."

Pearce has gotten used to the constant speculation and criticism over his selection or otherwise. A stint in rehab followed a well-publicised pre-season incident that saw him suspended for the first eight rounds and effectively ended his hopes of retaining his Blues jersey after a promising but ultimately fruitless 2015 comeback campaign.

The maturity and perspective he has gained in that time hopefully means that for Pearce, 2017 is different.

"It's no secret as a state, we've won one series in 10 years. They've had a brilliant side, been way too dominant and it kills me. It kills me that we haven't won a series, it kills all the boys."

Pearce tipped a "fast and flat" style for the Blues this year with Peats providing crisp service to his halves from dummy-half. Even halves partner James Maloney, with whom he claimed the 2013 premiership, plays a similar style to current club halves partner Luke Keary, according to Pearce.

"The best thing with me and Lukey, our games complement each other and I think you'll see us play a similar style to how we play at the Roosters next week and through the series. I've played a lot of footy with Jimmy as well," Pearce said.

That pair plus Peats and fullback James Tedesco makes for an excellent spine, in Pearce's opinion.

"I think we've got a really good spine, players that are in form," he said.

"The same style I play with Lukey, me and Jimmy don't play too dissimilar. They're similar players so we didn't play too different a style when we played together. It's a style I'm comfortable with and I think it should give us every chance to play good footy against Queensland."

Until Sunday night, Pearce didn't even know for sure if he'd be in the Blues team. The call arrived from Laurie Daley it came not just with the revelation he was in, but that Daley was picking the team to allow Pearce to run it.

"When I got the call off Loz he was pretty positive about playing to my strengths, playing the style we play at the Roosters," Pearce said.

"That's the style I'm comfortable with and I'm looking forward to implementing that this week and getting the boys around as soon as we start training on Wednesday.

"It's good trust. It's my job, I'm at an age where I run our side at the Roosters and I call most of the shots there. It's a style I'm comfortable with and as a rep team you're obviously playing with different players."

Pressed on the chance to take full control of the team, Pearce refused to blame team structure for his previous inability to claim a series win.

"There's been all different reasons [we haven't won] and at times I haven't played to my potential," he said.

"I haven't played great in different situations, in other games we've played well. There's been a lot of different situations as to why the team hasn't won over the years but for this series, to give ourselves the best chance, playing to my strengths and the halves' strengths is going to give us is going to give us every chance to attack as well as we can.

"It's my job to take responsibility of this side. Peatsy, everyone knows the style he plays, he plays tough and he gives good service out of dummy half. I don't think he'll be coming up with anything magical in a week, he'll play that style and we've got a really good forward pack.

"If we can play a flat and fast, powerful style against Queensland it will give us every chance as well."

New skipper Boyd Cordner threw his support behind his clubmate and close friend to show his best this series.

"Just how he's matured as a player, we've seen that this year in his performances, I think he's starting to realise how good he is," Cordner said of Pearce.

"Just the maturity he's shown and has taken that next step of being a good player to a great player.

"You can see in his performances this year that he's in the game for 80 minutes and really stands up in the tough times that we've needed him at the Roosters and we'll need him to do the same for NSW." 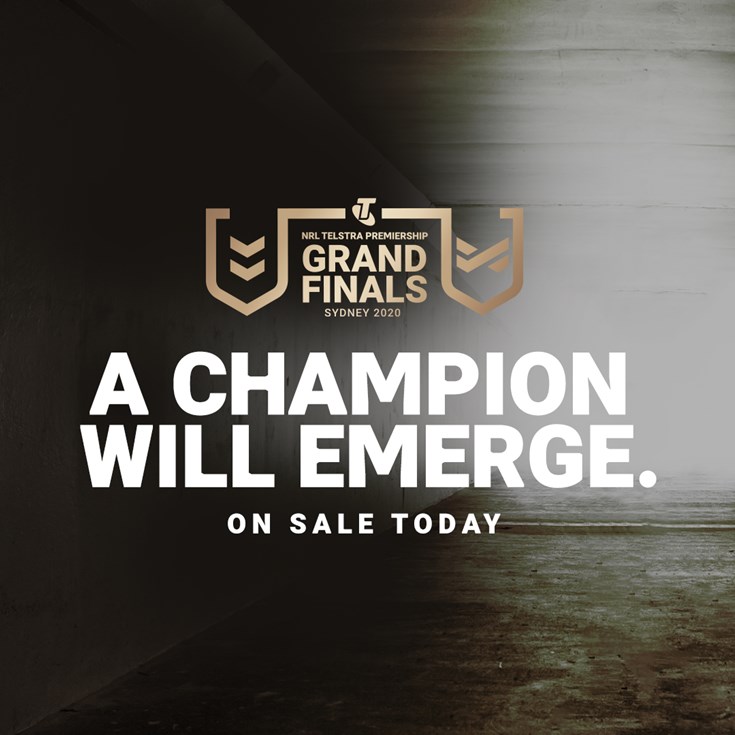 Getting Your 2020 Grand Final Tickets

Presented By Easts Group 2 hours ago

Presented By Bauerfeind 2 days ago