A rare combination of dignity and determination… and perhaps a little darn intimidating at times.

Ruan Sims has been all these as the Jillaroo, NSW Origin, NSW Country, Roosters and Sharks player draws the curtain on a sterling career.

Anyone can look up her representative stats, figures, awards and achievements.

But what is the legacy of Sims, which can't be measured by video analysis or viewing her biography?

For some the World Cup-winning captain conjures up a mixture of feelings.

Current NSW Origin coach Andrew Patmore was assistant to Ben Cross in 2018 year as they prepared the Blues side for the North Sydney Oval showdown with Queensland.

"I went to Crossie's first training session last year and there'd been a change of staff and I wanted to jump on board, so I did.

"I remember walking into the room and she was the one that stood out straight away. She does command a room, and the girls certainly look up to her."

In November 2016, Sims became the first woman to sign a contract with the Sharks as the women's game turned up the dial on professionalism.

Head coach of the Sharks team in the Harvey Norman Women's Premiership, Glenn Brailey, didn't know quite what to expect of the player he'd heard so much about.

"Before I got her into my team I didn't know what to expect. I knew she'd been a pioneer of the women's space growing so rapidly in rugby league," Brailey told NRL.com.

"She's been a Jillaroos captain, a NSW captain and Origin player so she's been at the elite level for quite a long time.

"So I'm thinking, 'What am I going to get here?'," Brailey reflected, in fearing he might have a bit of a prima donna on his hands, needing more attention than he was prepared to give.

New medal to be named after league legend

"But she was such a pleasure to coach. She didn’t profess to know everything. She learned new things from me, and took it all in, and worked at her game. She was always humble."

Brailey picked her for his 'Player of the Year' at Cronulla's 2019 presentation night.

"She has a tonne of courage. This year with the Harvey Norman women's comp she had to play more minutes than a front rower normally does," Brailey said.

"When I said to her 'I need you to go back on' she always did it. At the end of the game she'd be knackered, busted, but never complained.

"She got her body right, worked hard to get herself ready to go the next weekend. She didn't miss a game. She's an absolute professional in her preparation.

"Ruan has great leadership skills. She knows when to lead and when to follow – which is the first lesson for a true leader.

"She has a very, very good footy brain."

That knowledge, which she fine-tuned around the family dinner table with NRL-regulars and brothers Ashton, Korbin and Tariq, led to commentating duties with ABC Grandstand and the Nine Network.

Ruan does command a room, and the girls certainly look up to her.

"Imagine some of the old journos 15 years ago if you told them there'd be a female commentator doing sideline, on-ground interviews, sitting on pre-and-post match panels discussing tactics and the game?" Patmore adds.

"They'd have fallen off their chairs.

"That's how quick things have changed. And it's been Ru at the forefront of all that – she's helped make it happen.

"She and the other girls that have played the last four or five years have brought this game from park footy – on some awful grounds – to what it is today.

"I don't know another sport that's changed that quickly through what these girls have done.

"We talk about legacy and what someone like Ru has done and the fact is they've done an amazing job for women's rugby league.

"In that sense, the women's game has gone from a poor style of footy to entertaining, crisp, elite, marketable football.

"And Ru's been one of the main leaders of that. Through her family's connection she's brought some really positive publicity to the game."

Patmore says it would have been difficult for Sims to pull the plug as she'd been at the elite level for a decade.

And it hasn't been all awards and adulation. Sims was in Patmore's 24-member Origin squad this year but missed out on the 18 named.

"She didn't make Origin this year and that really hurt her. But she carried herself with so much grace through that," Brailey said.

"I had a lot of respect before that, but now I have a whole lot more. The way she held herself is what true champions do, and that's because she is." 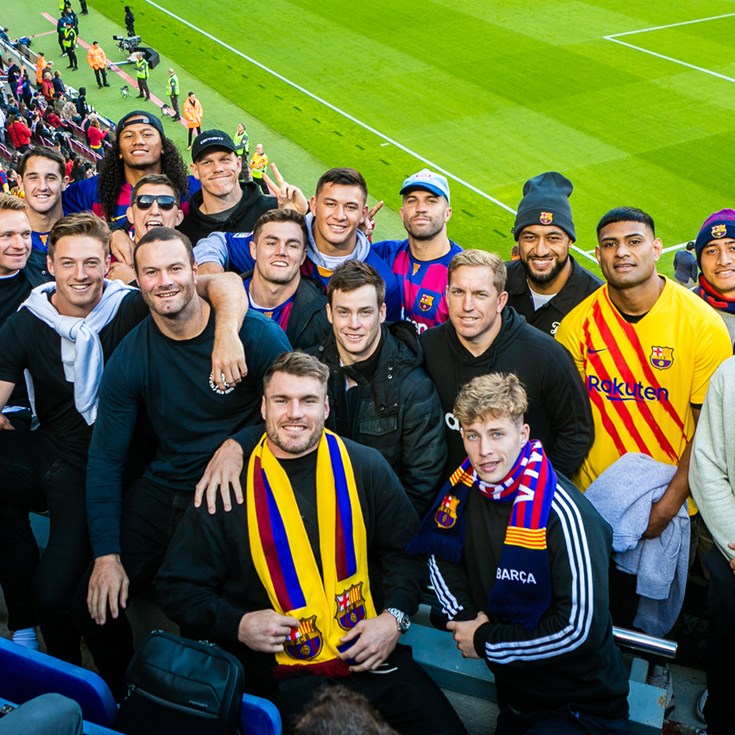 The Roosters At Camp Nou

Roosters on the Road